It’s not every day that a newly spoiled card ignites a genuine excitement within the Modern community, but Assassin’s Trophy has accomplished just that.

It’s been a long time since the G/B community was this thrilled about a set release. Maybe since Fatal Push was printed in Aether Revolt? Or perhaps Shadows Over Innistrad with Grim Flayer? Or maybe we have to go all the way back to Return to Ravnica (six years ago) and the release of Deathrite Shaman and Abrupt Decay to compare the excitement we’re seeing for Assassin’s Trophy. It will undoubtedly make a splash in Modern and it’s clear people are pretty eager to try it. Let’s look at what we can expect from this new chase-rare and how it affects our deck construction.

What’s so different about Assassin’s Trophy compared to other removal spells we’ve gotten in the past?

The most important things about Trophy are its range and rate. The ability to hit everything, including Planeswalkers and lands, for two mana at instant speed puts this card above anything else we’ve used for this effect in the past. Maelstrom Pulse, at the top of our curve and at sorcery-speed, was a necessity because it was our only answer to tricky permanents like Planeswalkers and enchantments. Abrupt Decay was cheaper and an instant but could only hit cheap spells. In a world full of Gurmag Anglers, Teferis, and Hollow Ones, it has felt lackluster as of late.

The card does what both Decay and Pulse want to do but better, because it can ALSO hit lands, a historically difficult permanent for G/B decks to interact with.

The scenarios where this card is relevant and above par are innumerable: destroying Teferi on turn five before untapping two lands, destroying a Tron land before turn three, destroying a Raging Ravine or Azcanta, the Sunken Ruin, and so on. It’s pretty easy to replace cards like Terminate, multiple Maelstrom Pulse, and Abrupt Decay for this card. While this may reduce the diversity in our removal against cards like Meddling Mage, I think the upside is too high to ignore.

Great, so you’re saying Assassin’s Trophy is good? We kinda already guessed that.

Right, of course we know that, but let’s not get too excited and caught up in the hype here. This card will not make G/B an unbeatable deck or even a dominant one. The meta is still wide open and our bad match-ups will still be bad. Don’t go up against Tron thinking it’s in the bag just because you have four copies of Trophy in your deck.

G/B decks are good when they can have as many main-deckable answers to the most-played cards in the format. Picking up game one is highly advantageous for us since our deck becomes even better in sideboarded games when we can tweak our deck for the match. Even in an open meta, G/B decks will be able to gain some percentage points by replacing cards with narrower application, like Terminate and Decay, with Trophy. The big BUT to this is that it will not make our deck some kind of unbeatable menace in the format. To dispel unrealistic expectation, I think it’s best to approach this card simply as another removal spell and leave it at that.

What does Trophy mean for deck construction?

Obviously we’re looking to replace more narrow cards with this catch all, but beyond that there might be some other considerations. For one, if you’re in a three color combination and you’re expecting to face Trophy, it may be beneficial to hedge against it and add another basic to your deck. Similarly to when Field of Ruin entered the format, people were caught off guard and quickly realized they were susceptible to Ghost Quarter effects. You can expect G/B rock to play Field of Ruin right along side Trophy and Abzan may do the same with Path. To be safe, I would consider adding an extra basic while the hype is high.

For Jund players, if Bloodbraid Elf hasn’t impressed you, it may be time to revisit the infamous berserker.  The worst part about BBE is that the value can be underwhelming. We’ve learned that we can’t jam a bunch of three drops for value, because then decks are able to aggressively attack under us, so playing efficient cards can sometimes mean bad cascade hits. We’ve adapted and understood that it comes with the territory and either accepted it, or simply stopped playing her. Now there is a card that is efficient and will ALWAYS have a target, even if it’s just a land. Trophy may help eliminate some of the doubt people were feeling about BBE’s place in Jund, including myself. I’ve been a pretty big proponent of cards like Huntmaster of the Fells over BBE, but I may spin the wheel once more now that Trophy helps those cascade odds.

Abzan already had great creature removal with the combination and efficiency of Path and Push. Recently players have been trying to cut Path because of the Rampant Growth it gives the opponent. Players felt that the mana advantage it granted made the card an improper fit for the strategy. Now, Abzan players are talking about running opponents out of basics with Path and Trophy in the same deck. It’s hard to ignore Trophy as an incredible asset, so if you’re already playing a card that accelerates your opponent’s mana, you might as well play the most efficient one mana removal spell in Modern as well.

For G/B Rock, the need for playing cards like Dismember and Cast Down should be pretty small now. With excellent removal and excellent consistent mana, I can see why many people are interested in cutting a third color with the addition of Trophy.

Trophy also may give birth to a G/B deck I’ve yet to mention on this site: Sultai. The deck has a lot of composition problems because blue’s card advantage and permission spells don’t pair well with the typical Rock style strategy. If a Sultai deck exists, it will probably ignore cards like Mana Leak and Serum Visions, which are cards that compete with the natural curve of discard into threat. More than likely it will minimally splash for Creeping Tar Pit and Snapcaster but not much more. Can you imagine playing Snapcaster and giving Trophy flashback? It sounds amazing and I’m excited to try it!

Not only will Trophy affect our mainboards but our sideboards as well. People will no longer need to play 4 Fulminator Mages with multiple Alpine Moons and Damping Spheres to have a chance at beating big mana decks. Having a versatile Stone Rain effect in our mainboard will allow us to drop some of these dedicated slots and pivot our 75 towards the meta as a whole and not just our bad match-ups.

How many Trophies should I run?

To start, I would just go ahead and jam four copies. It’s hard to know where the floor and ceiling is for the card if you’re only playing one or two. Play the full four and then if it ends up under-performing, you can trim copies. Take note of what you use it on and what card you would have had available instead of Trophy to help evaluate its impact.

Here’s a 5-0 Jund list from user xXlogosXx that we can look at to see where Assassin’s Trophy might fit.

With the release of Trophy, I’m interested in trimming the singleton Decay, Dreadbore, and Terminate along with one Liliana of the Veil. Remember this is just to test the mettle of Trophy while trying to understand how powerful it is. It’s possible over time that people will settle on a different number than four copies, and the fourth Liliana could be re-added. But, I believe new cards like this are best evaluated when they are played as a playset.

Next, lets look at a 5-0 list from user Fallleaf and do the same thing for Abzan. 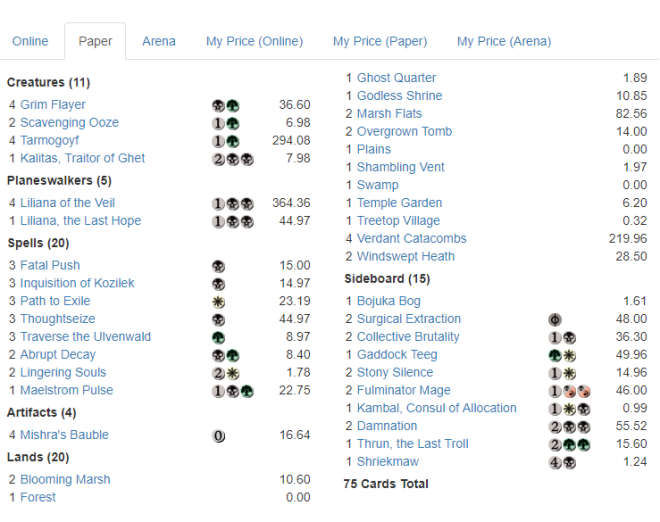 In this list, I like cutting the Decays once again along with one Path to Exile and one Liliana of the Veil. Decay will most likely be sidelined in every version of these decks moving forward. Unlike Legacy, where blue permission is very powerful, Modern just doesn’t have many blue decks that can afford to load up on reactive cards like Mana Leak. Even when they do, they tend to go a bit bigger than three mana for their finishers. Take Jeskai for example; It’s great when you can snag a Search for Azcanta without having to worry about permission, but Trophy not only hits Search for Azcanta, but also the flipped version and all of Jeskai’s powerful Planeswalkers. Pulse will most likely remain since it can hit larger threats than Decay and can also sweep multiples.

Lastly we’ll look at a G/B Rock list that went 6-1 in a Modern Challenge piloted by _kg. 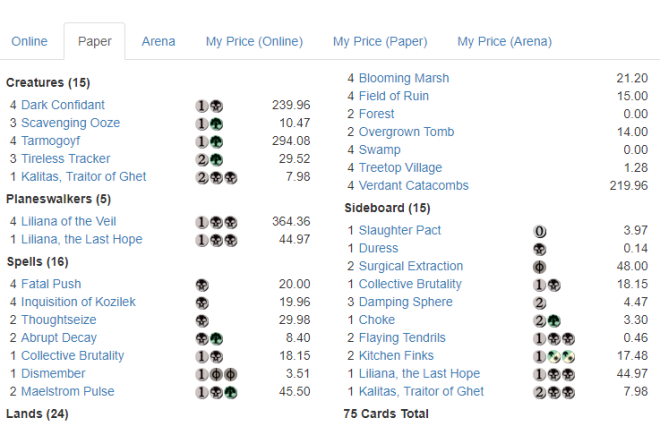 As mentioned before, the need for cards like Dismember, Cast Down, or any other weak Doom Blade effect should be mostly unnecessary now. For this reason, I would cut the Dismember, both Decays, and one Maelstrom Pulse.

Many people are going to be sleeving up Assassin’s Trophy this weekend with high hopes. Some are new to the archetype and others will have a renewed sense of excitement for the deck they love.

Remember, you’re not going to suddenly win all your bad match-ups just because you’re playing four copies of Trophy. I think the excitement for this card is warranted, but don’t let that enable unrealistic expectations. Playing G/B means you’re never playing on easy mode.